Posted on 10th June 2020 in Blog by Andrew Mitchell

Young volunteer Georgia Gorbould explains more about some of the marvellous moths seen at this time of year. 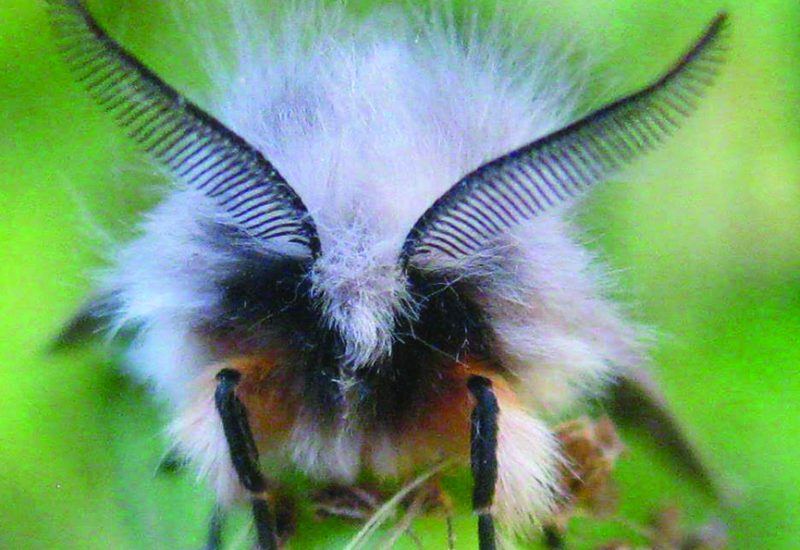 May is often seen as a month symbolic of growth, prosperity, abundance and most importantly new life. From baby birds to extensive families of rabbits, May is a time in which the exploration of new life can be vastly appreciated.

In the world of insects this is no different, as more species take to the air and the water. From butterflies and bees to beetles and wasps, they all have a part to play, perhaps none more so than the Moths which populate the varying habitats within Northumberland.

Despite common belief, Moths are not solely creatures of the night: in fact there are more species of Moth flying during the day, than there are butterflies, and they have a very important role within our ecosystems. As some of the best plant pollinators, they are one of the hardest working creatures in the Spring, alongside the many species of bees which can seen as well. Interestingly, Day-flying and Night-flying Moths have been found to pollinate a different variety of plants, leading to a greater seed production. This is especially important within agriculture as Moths are one of the greatest pollinators of crop plants.

Not only is the extent of their pollinating role often overlooked, Moths also play a vital role as indicators of the overall health of the habitat they live in. Moths are highly sensitive to any changes in an environment, and therefore by observing them, it is possible to determine what the changes to a habitat are and the impacts said changes will have, for example the consequences of insecticides and climate change.

Last year, my trapping throughout May was rather fragmented, however with the lockdown in place, I have been very lucky to be able to witness the activities of these creatures, which I have missed on other occasions.

I have also discovered a whole range of new species, which have been an absolute delight to observe and I hope you enjoy this snapshot into their world as much as I have!

The Swallow Prominent is an absolute favourite of mine alongside other related species (see below). 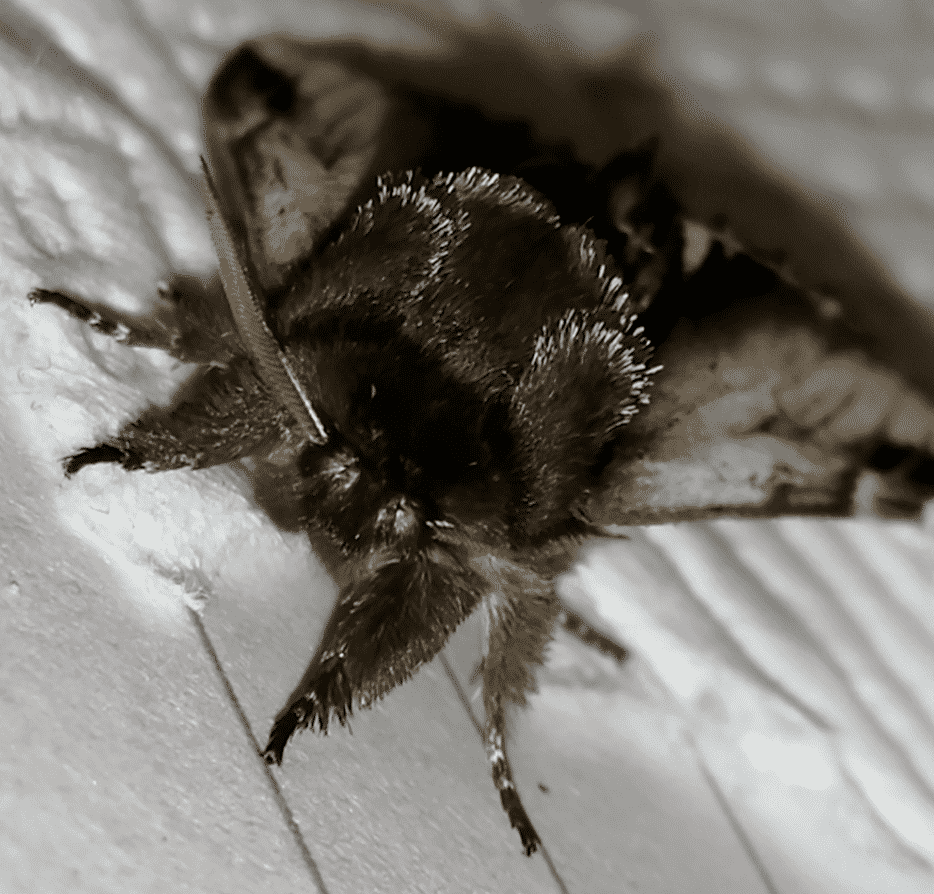 It is relatively common throughout Britain, flying between May and July. It is similar to the Lesser Swallow Prominent, the main distinguishing feature being the longer and narrower triangular white streak toward the base of the forewing. 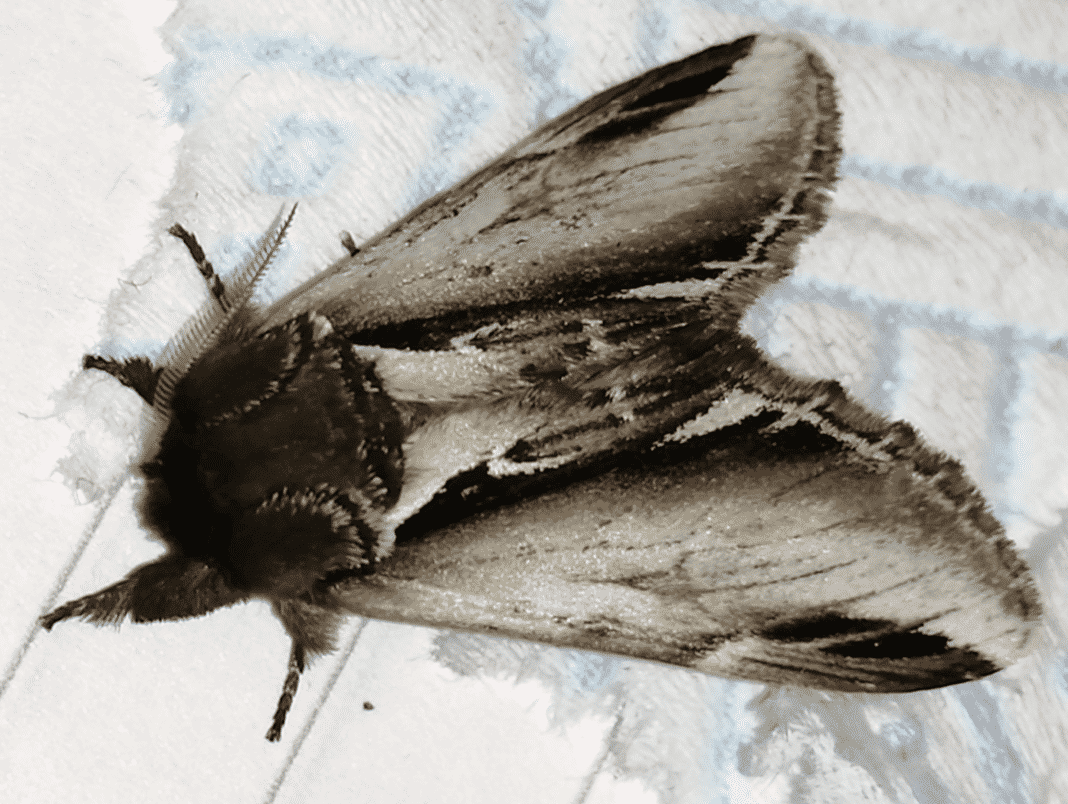 Despite being present throughout all of Britain, two separate broods only occur in the South.

The Pebble Prominent is another fantastic species to find in the trap, and can be seen between May and August, in range of habitats, although it usually prefers damper locations. 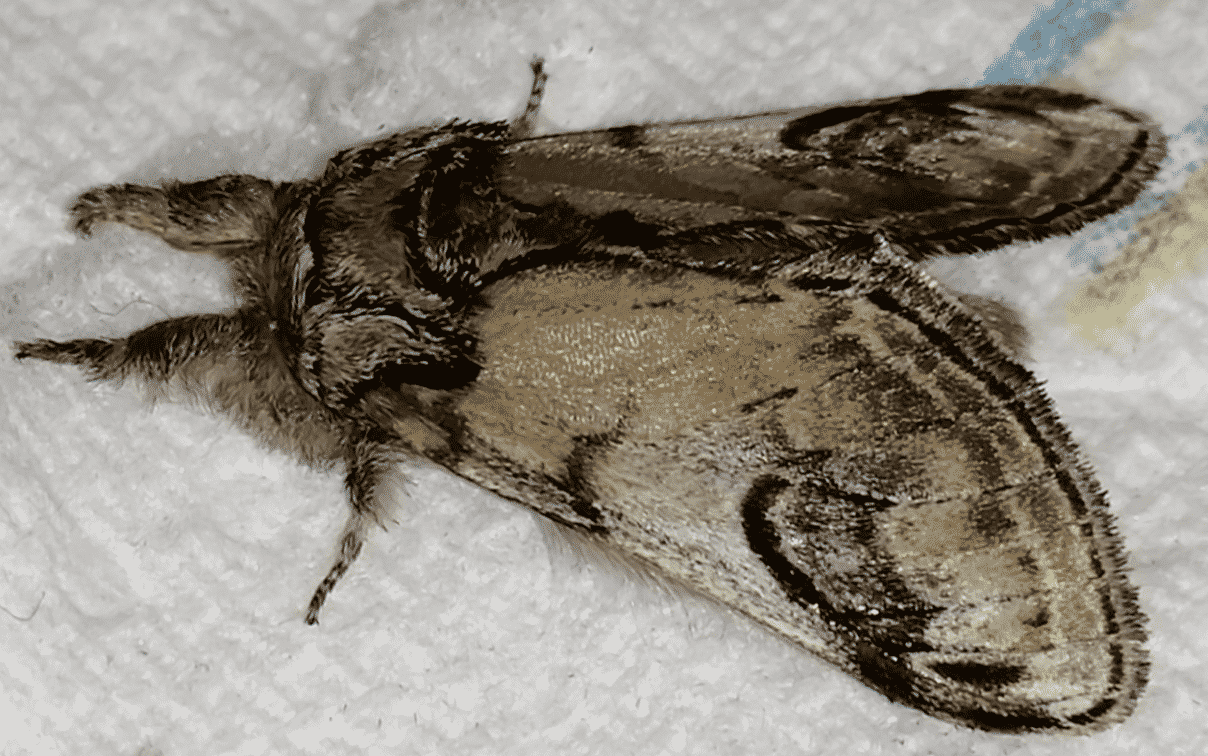 The name can be seen to derive from the pebble-like marking on the forewings. The Pebble Prominent has phototactic characteristics and can often appear in light traps in varying numbers. 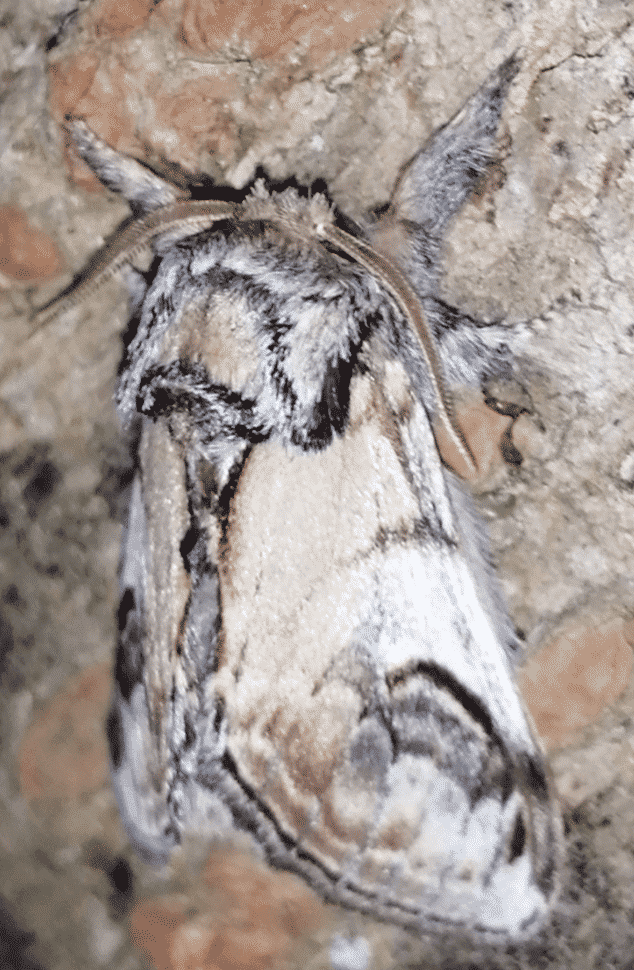 In the summer it is possible to see both the adult and larval form of this species, as they overwinter in the pupal stage.

The Coxcomb Prominent is a very distinctive moth to find in the trap and is always welcome. 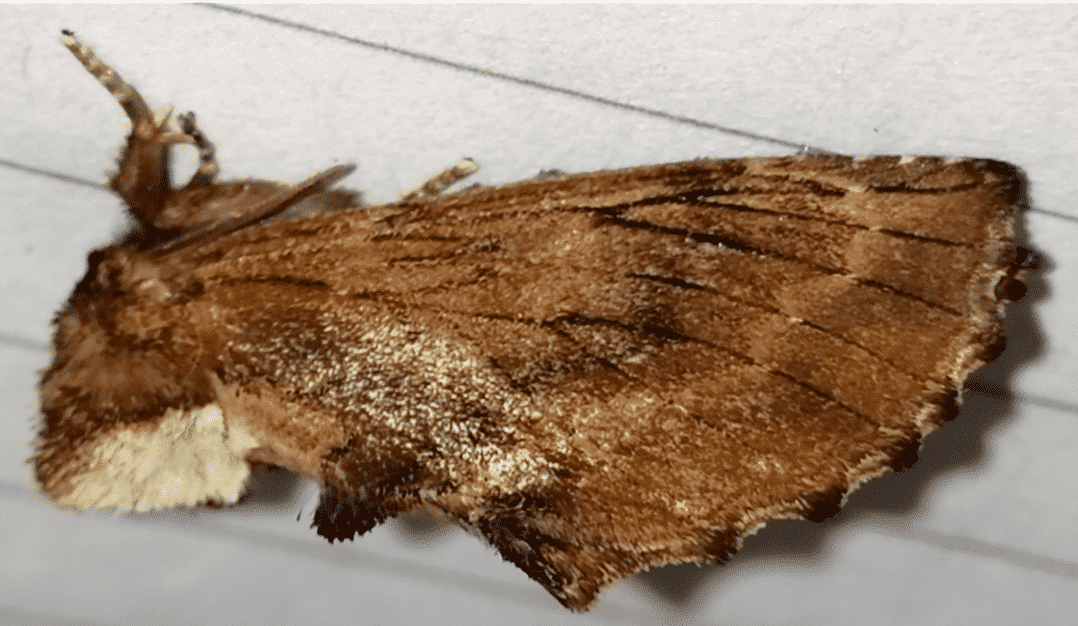 It is also relatively common in all of Britain, appearing from May to June, and then again in August. It is perhaps most well known for its acting abilities, as it usually plays dead when handled.

The Water Carpet is most commonly seen between April and May, as a Spring-flying species. 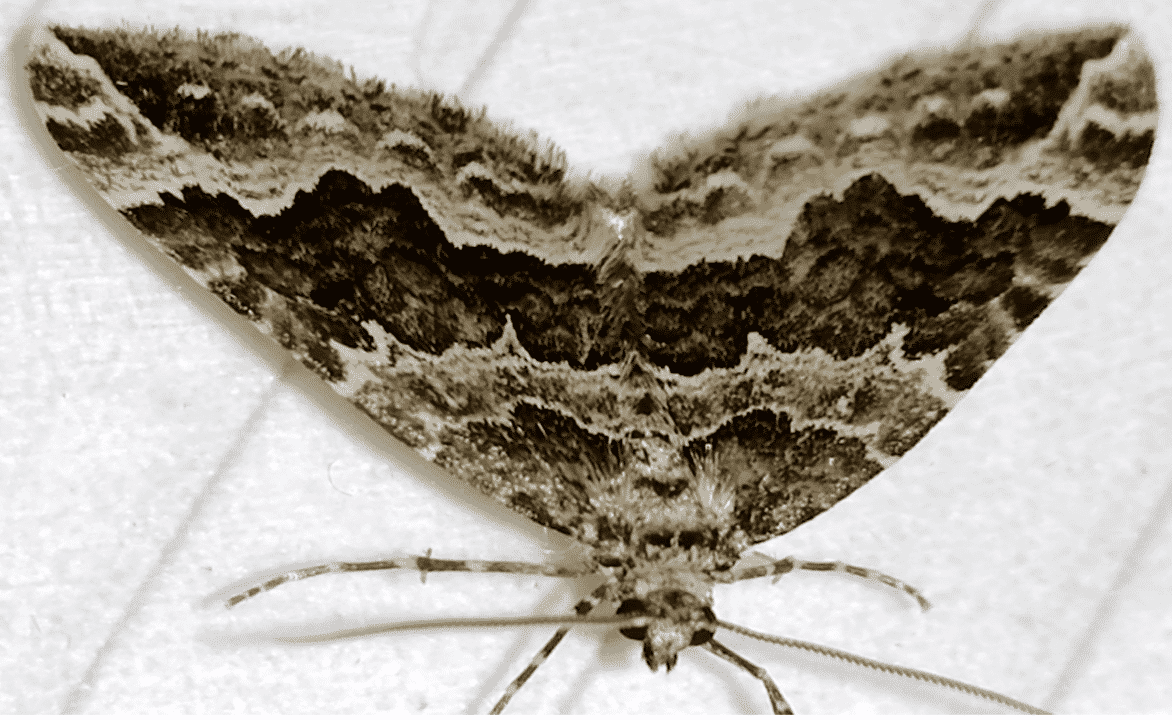 It can be found in a wide variety of woodland or scrubland areas throughout Britain. Similar to many other carpets, the males can be noticed by the fact that they raise their abdomen when resting.

Another phototactic species, the Least Black Arches can be seen coming to light traps between May and June. 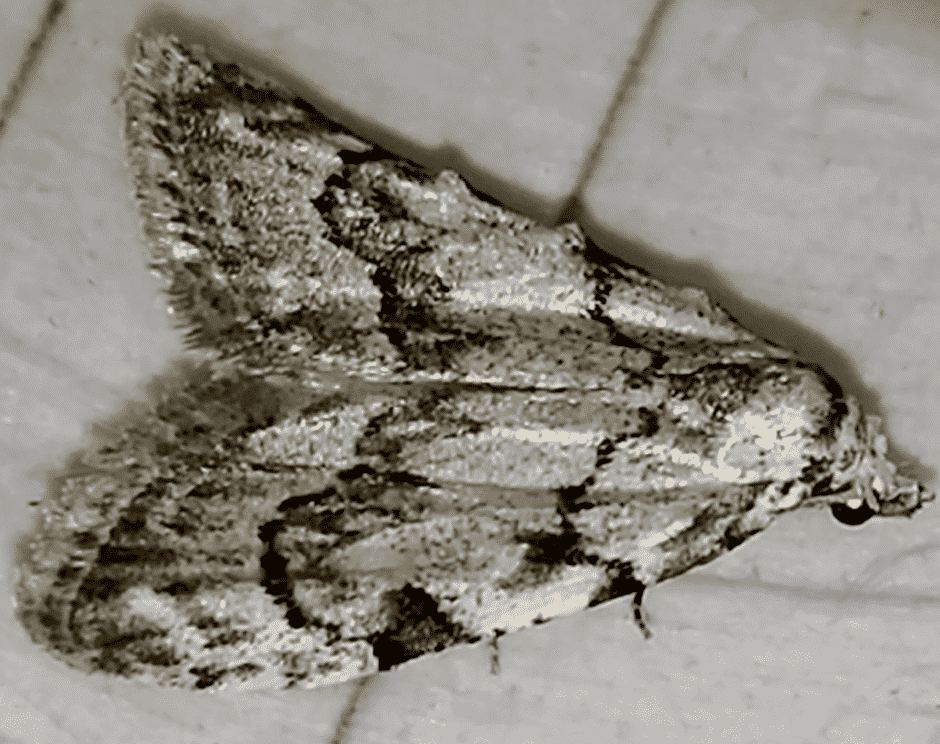 It is referred to as locally distributed throughout Britain, appearing most often in woodlands and gardens.

It is referred to as “local” within Britain after its significant decline in numbers. However, it is now recovering in many areas across the U.K

Another personal favourite and always fantastic to have in the trap, the Scorched Wing is unmistakable. 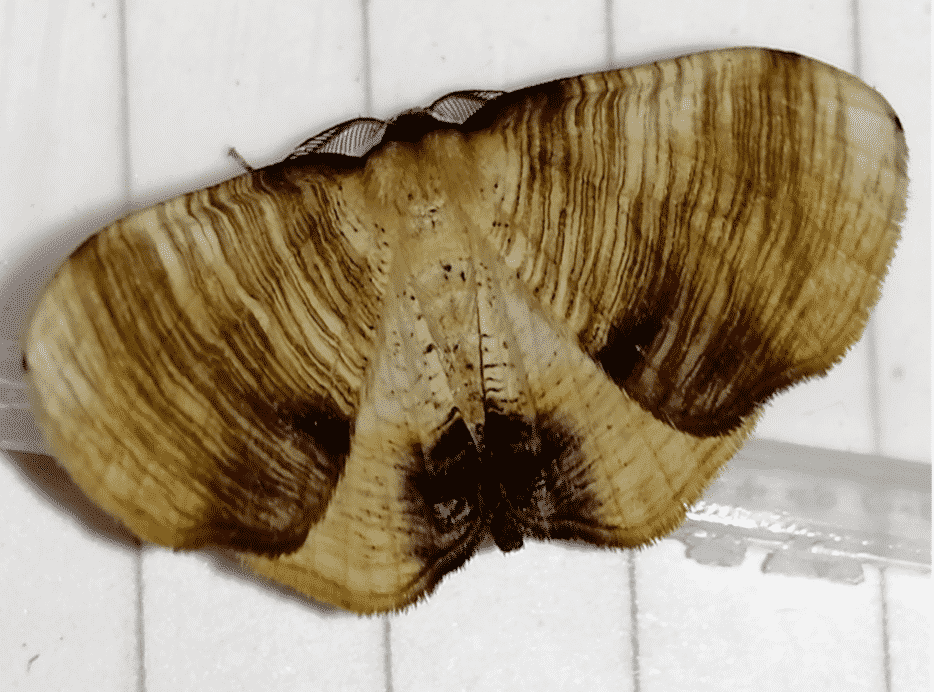 It is fairly evenly distributed across the U.K, with increasing numbers in Scotland. It is found in broad-leaved woodland or Scrubland between May and July.

The males are more phototactic than the females, and therefore more commonly visit light traps, although the females are attracted to sugar. 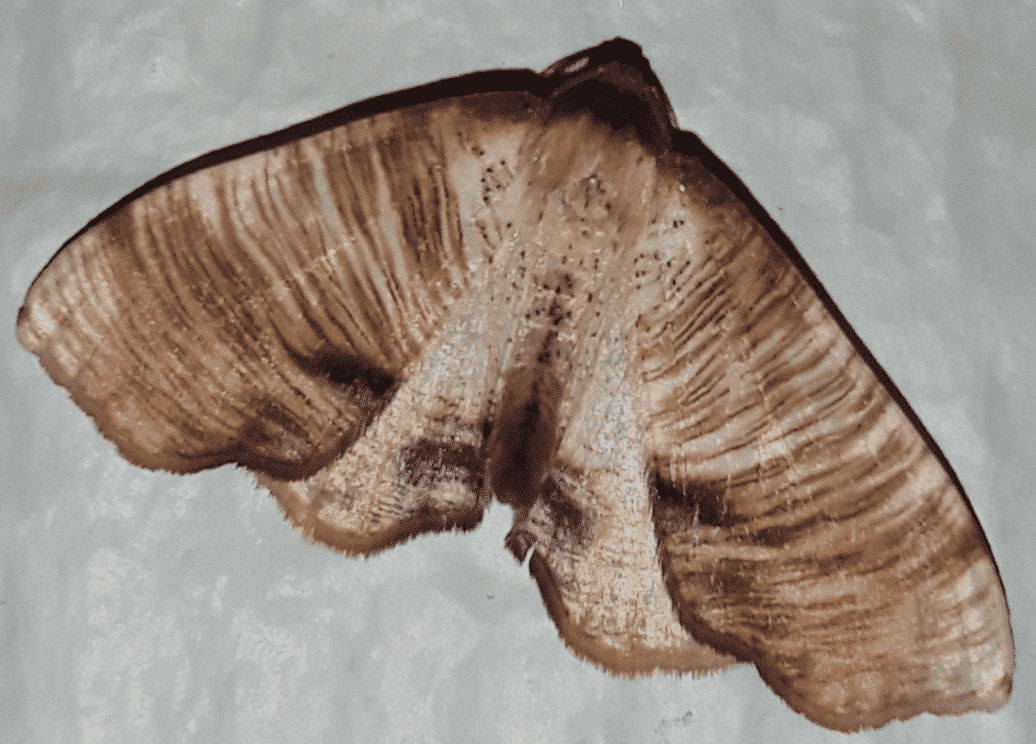 The raised abdomen is characteristic of the males. The common name represents the moths’ appearance, as it is often said to resemble burnt and crumpled paper. 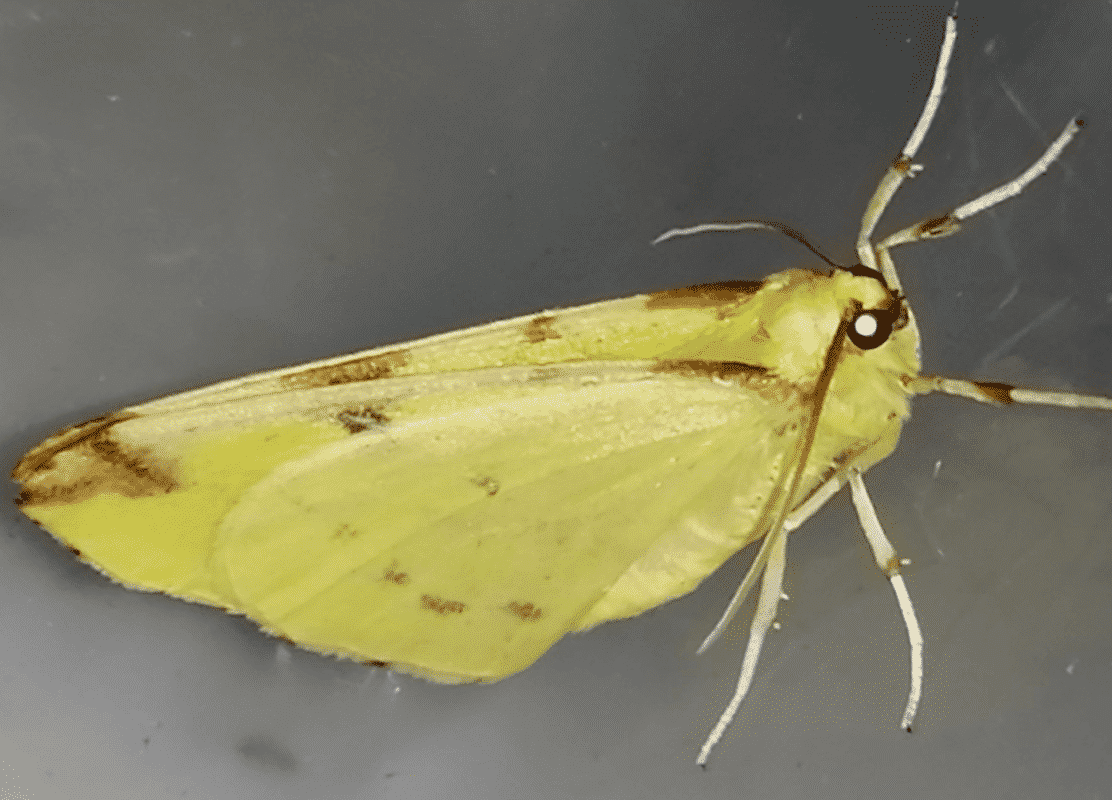 Named for its fantastic yellow colouration, the Brimstone can be seen on the wing from April to October in most areas of Britain. 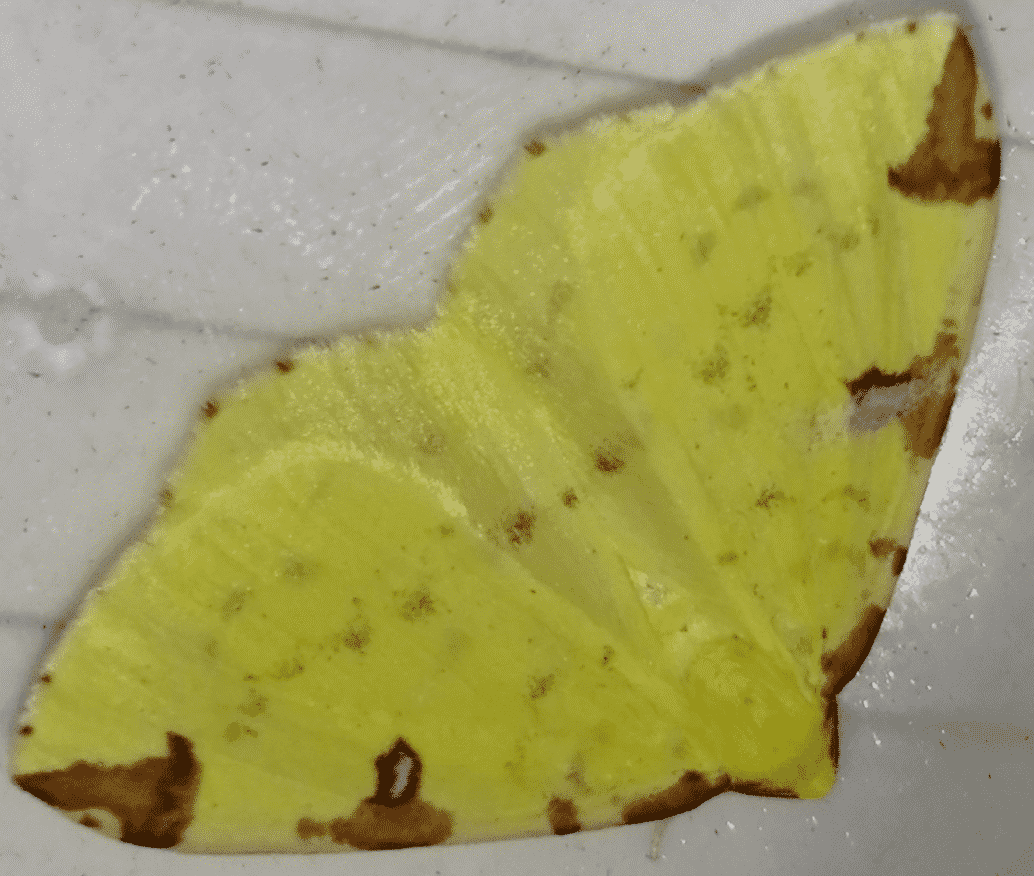 They are often seen around dusk, but also come to light. Interestingly, some of them overwinter as partially-grown larvae, others as pupae in or below plants in the leaf litter. They may also be found in crevices in walls.

Named for the white, moon-shaped markings on the wings, the Lunar Thorn is well camouflaged; its appearance closely resembling a dead leaf. 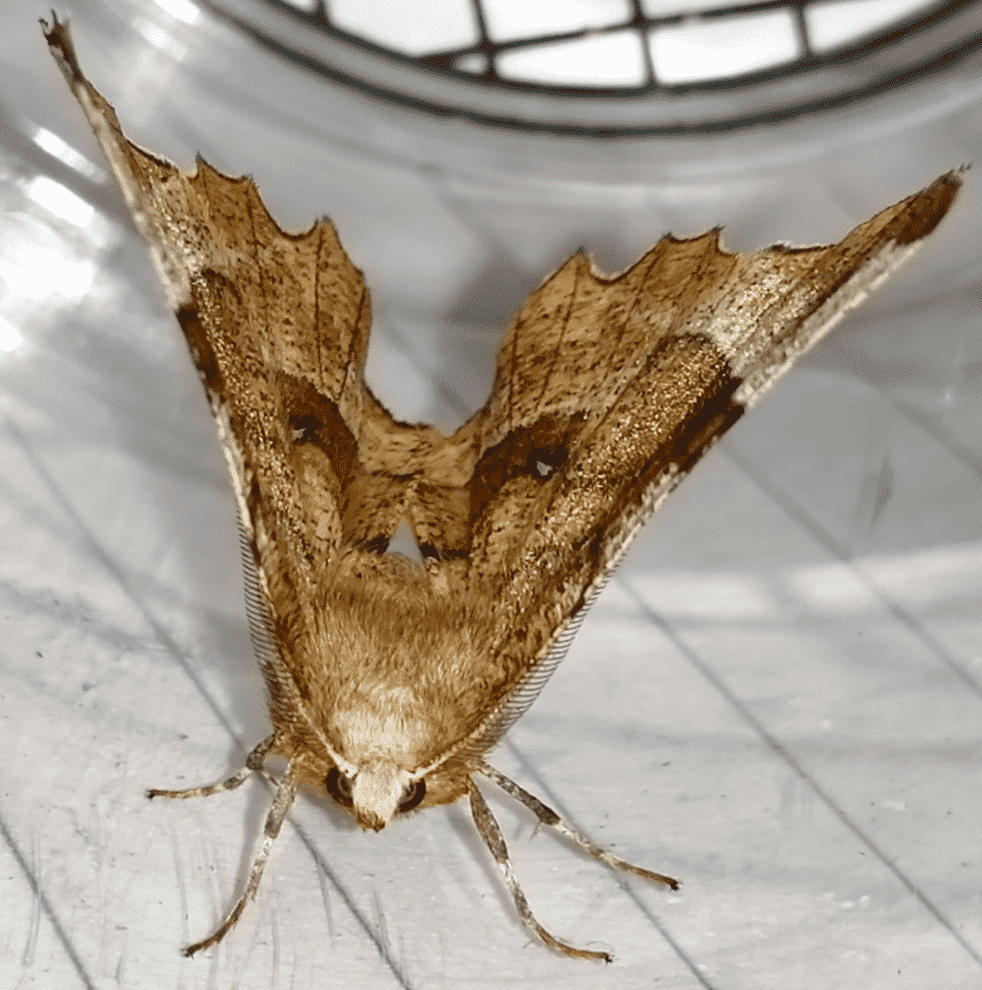 It can be seen throughout most of Britain, flying between May and June, and often coming to light.

In addition to the crescent markings on the wings, the Lunar Thorn obtains its name from the deep scallop on the hind wing, which is distinctive of the species. 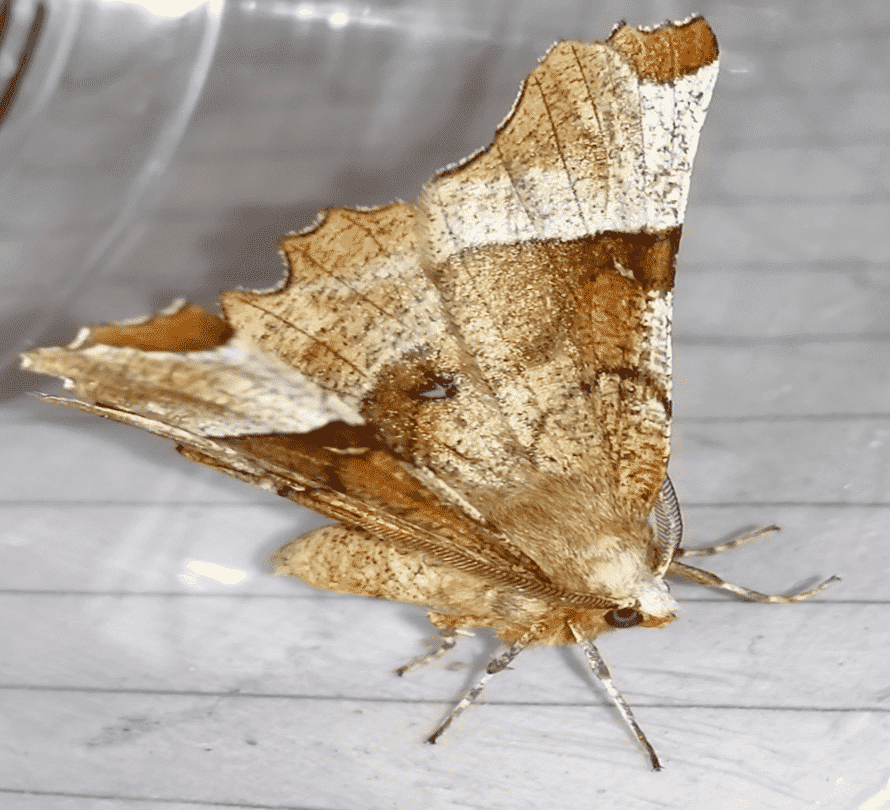 Similar to the Purple Thorn (see below), it rests with its wings open and the forewings partially raised.

The Purple Thorn occurs in two generations from April to May and July to August. 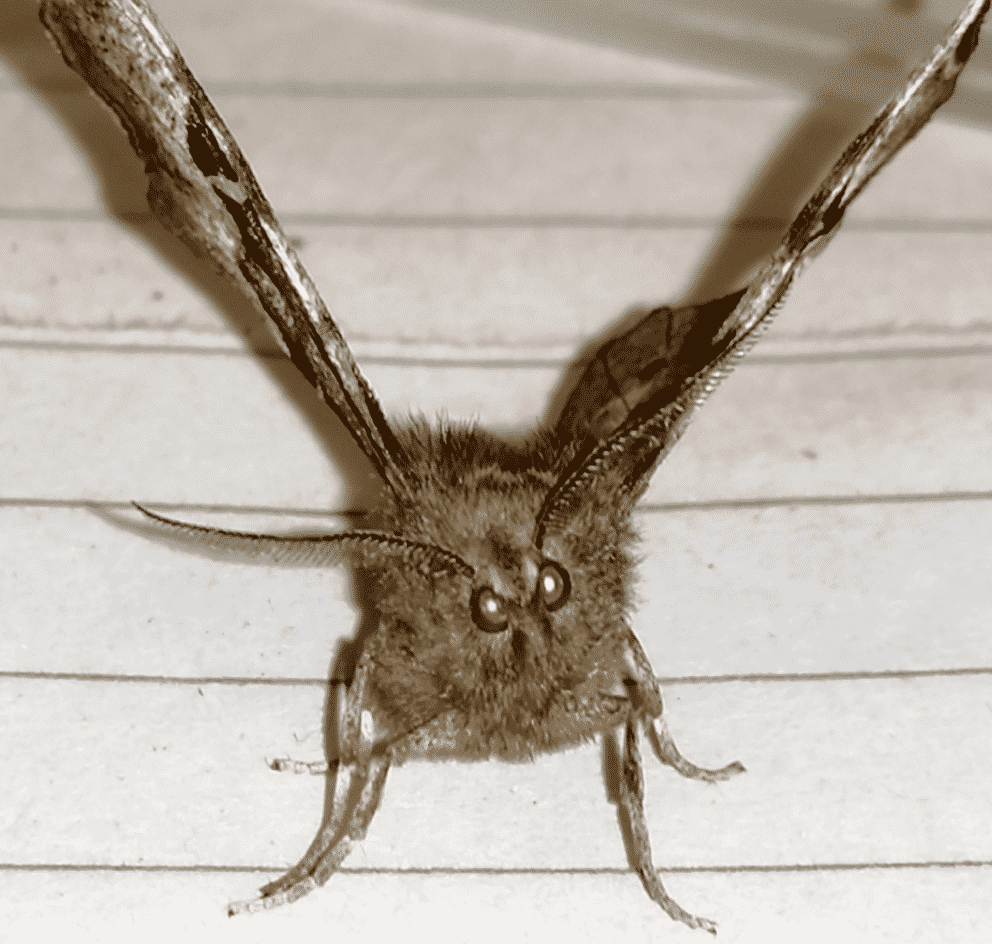 It can be found throughout Britain (though less frequently in Scotland and Ireland) resting with its wings open. 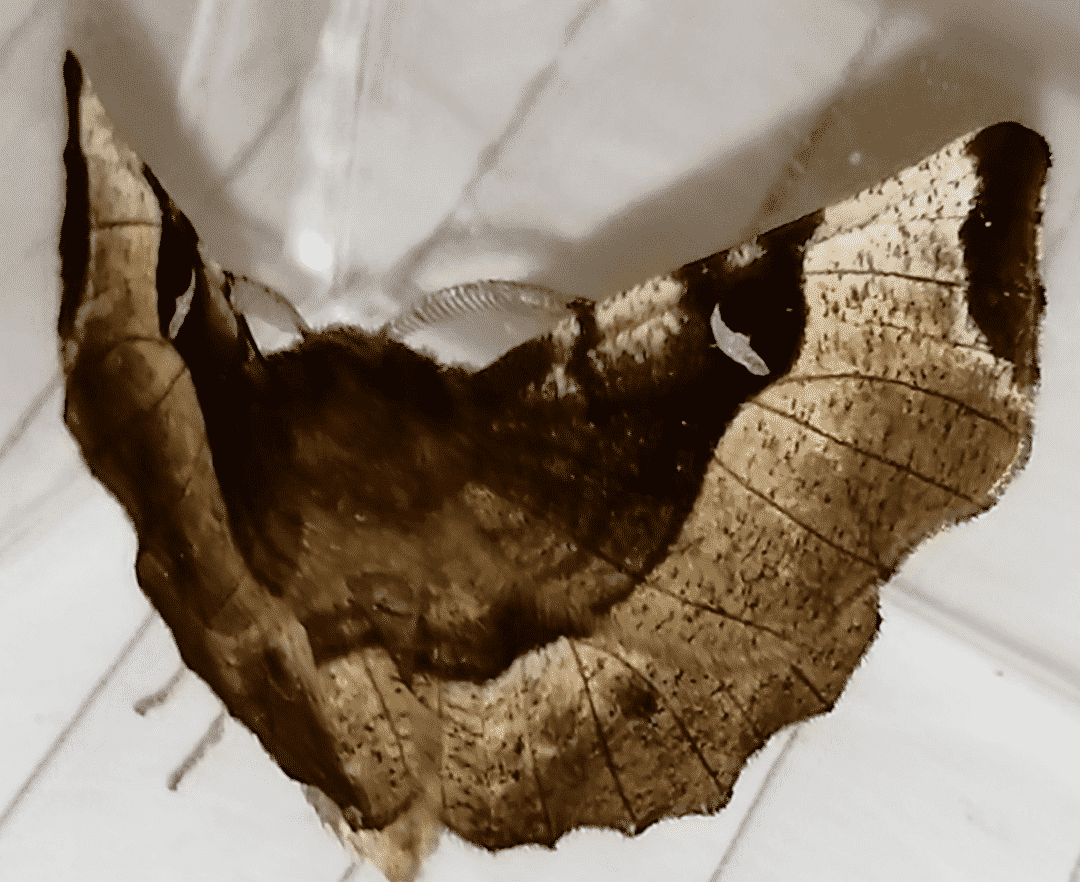 It can be distinguished most effectively from the Lunar Thorn by a central spot, usually of dark colouration on each hindwing. The adults are most often seen when coming to light.

The White Ermine is a wonderful moth to observe as there is vast variety within the patterning on the wings.

As a general rule they are white, with black spots dotted around the wings. However, the number and proximity of these spots varies greatly between species, with some appearing to have dashed lines in place of the spots, particularly along the veins. 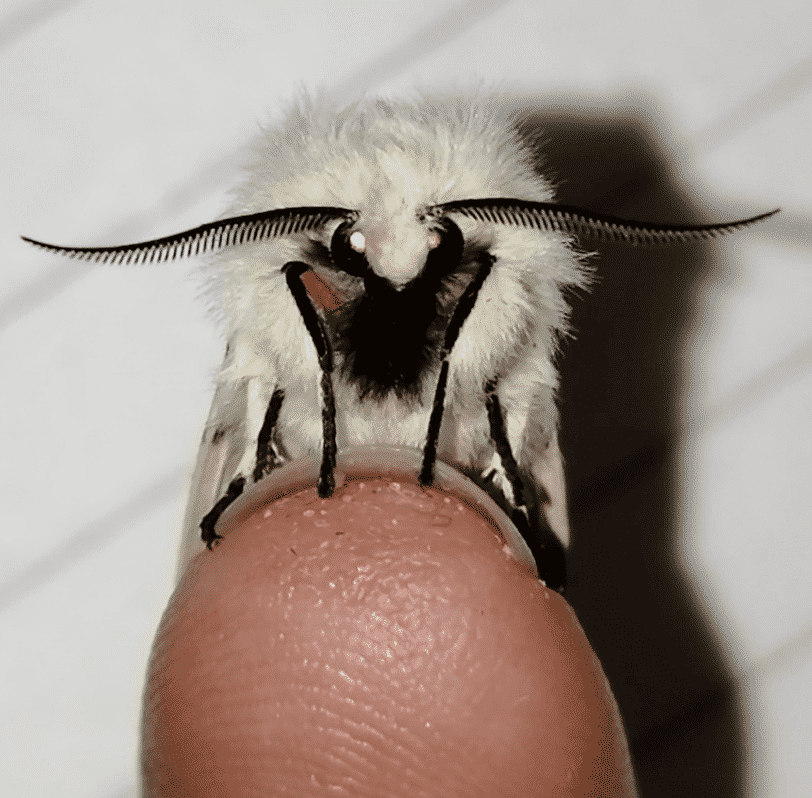 The colour of the wings also presents diversity ranging from white, to buff and brown specimens. They are common throughout Britain, occurring in most habitats, both rural and urban. 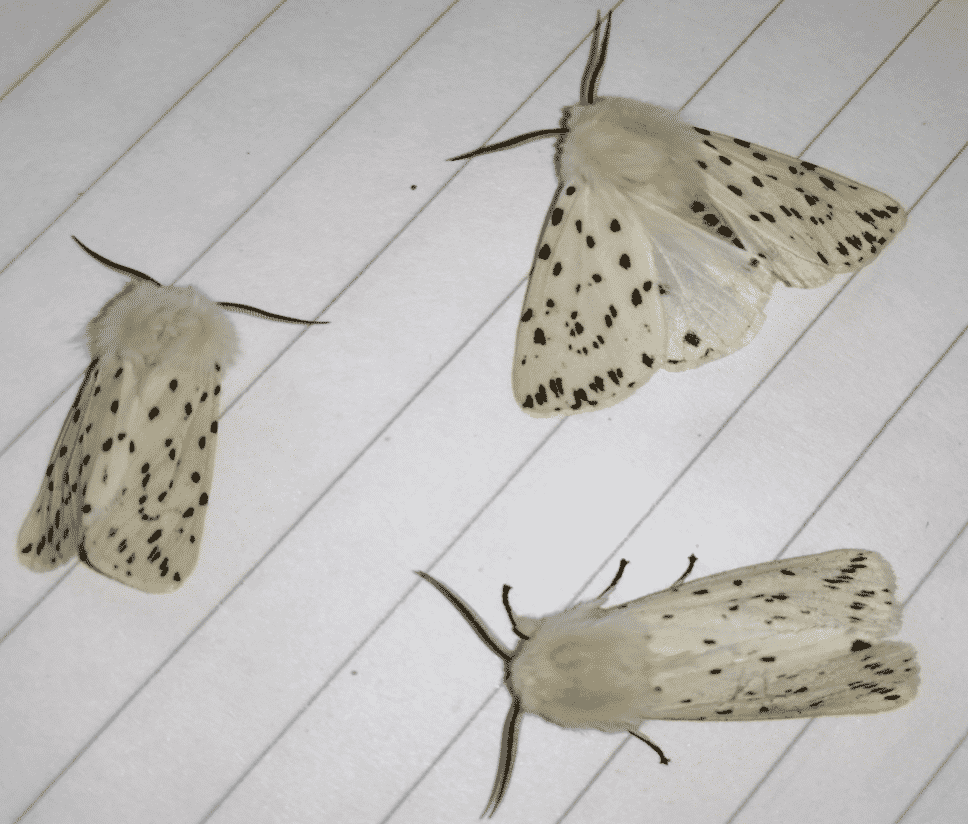 It is most often seen flying from May to July, although this differs slightly in the south, where they may be seen flying later in the year.

The Ermine Moths were named for their resemblance to the fur which often bordered cloaks of wealthier nobles and dignitaries in earlier centuries.

Related to the Ermine Moths, the Muslin Moth also highlights the variation which can occur within a species of moth, however the disparities this time occur between the male and female moths. This is referred to as sexual dimorphism. 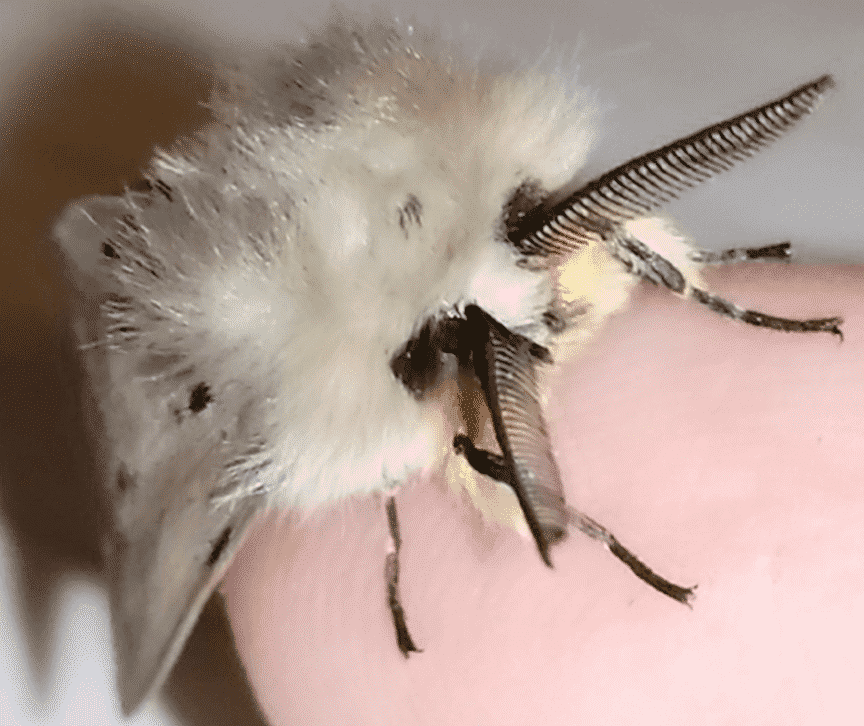 The female is usually of a whitish colouration, with semi-translucent wings. It is similar in appearance to other Ermine Moths, however the Muslin Moth is smaller and there is less yellow visible along the abdomen. The female is diurnal, active on sunny days in May and June. 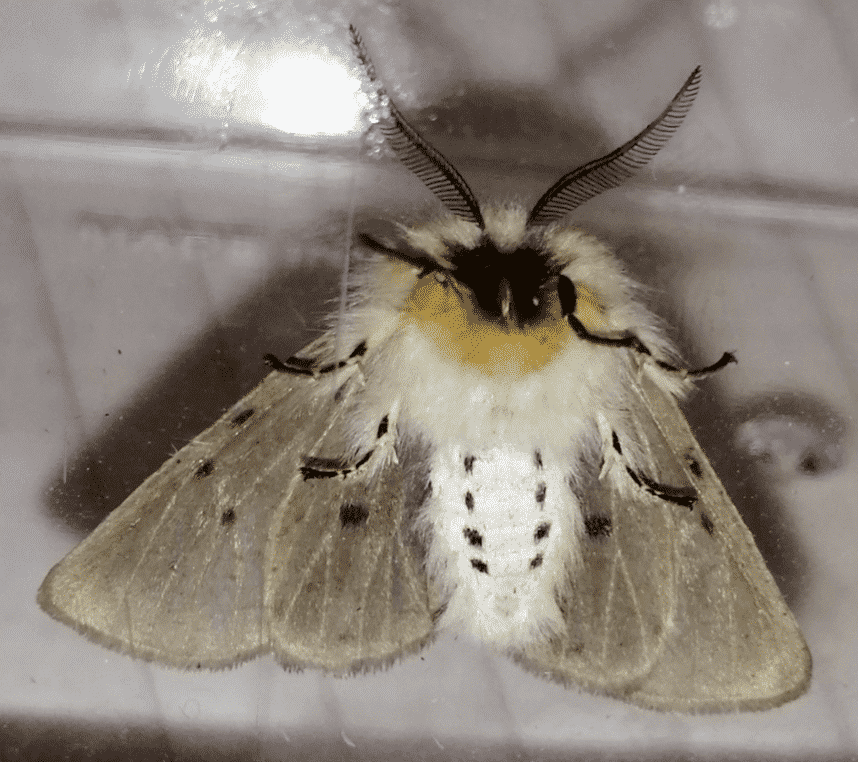 On the other hand, the male usually has a grey or brown colouration, although this is variable depending on the location. They are active at night instead of by day.

Muslin Moths are found throughout most of Britain, although their numbers are greatly reduced in mainland Scotland and Ireland, in a variety of open habitats.

Although the Brown Silver Line is nocturnal, it can be easily disturbed during the day, usually from areas of bracken or similar vegetation. 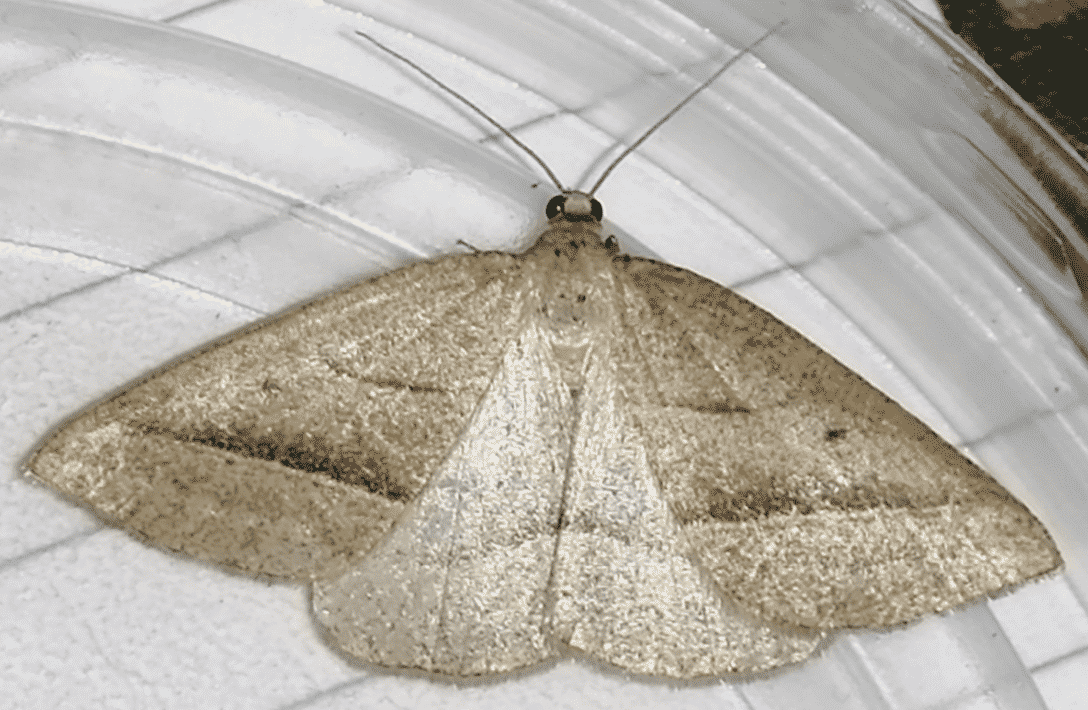 In addition, the larval form of this moth are Bracken feeders, and may often be seen feeding from July to September.

It is common throughout most of Britain in areas of heathland and woodland. Overwintering in its pupal form, the adult moth can be seen flying between May and June, and is often attracted to light.

Demonstrating little variation, the Streamer is a highly distinctive moth active during the night, and frequently attracted to light. 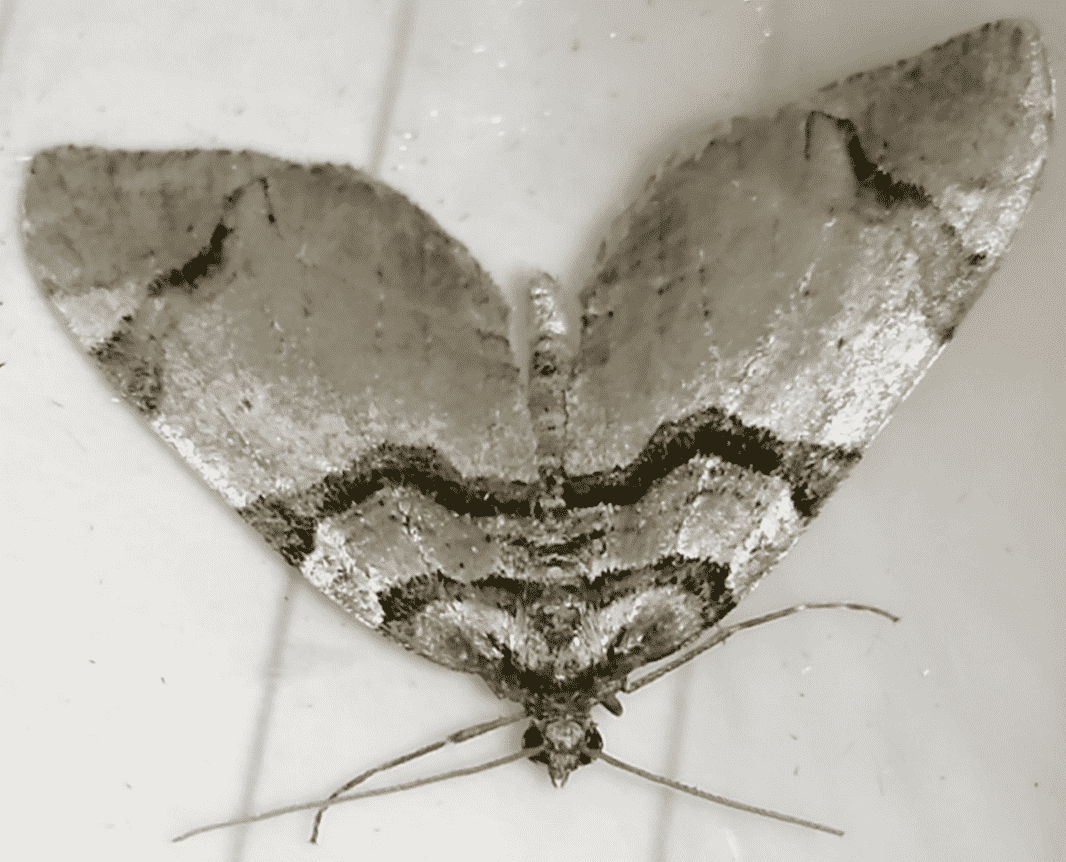 Diversity within the species occurs in the strength of the violet colouration, which fades as the moth’s life progresses.

It overwinters in the pupal stage, flying in the adult form from March to May, in areas of open woodland or scrubland, throughout the U.K.

The name derives from the black markings which are said to be “streaming” from the edges of the wings.