Posted on 9th August 2021 in Latest News by rebeccac1

The Northumberland Hen Harrier Protection Partnership is pleased to announce that this year, 18 young have fledged from five nests on Forestry England land and two private estates; the same number as last year for the county as a whole. 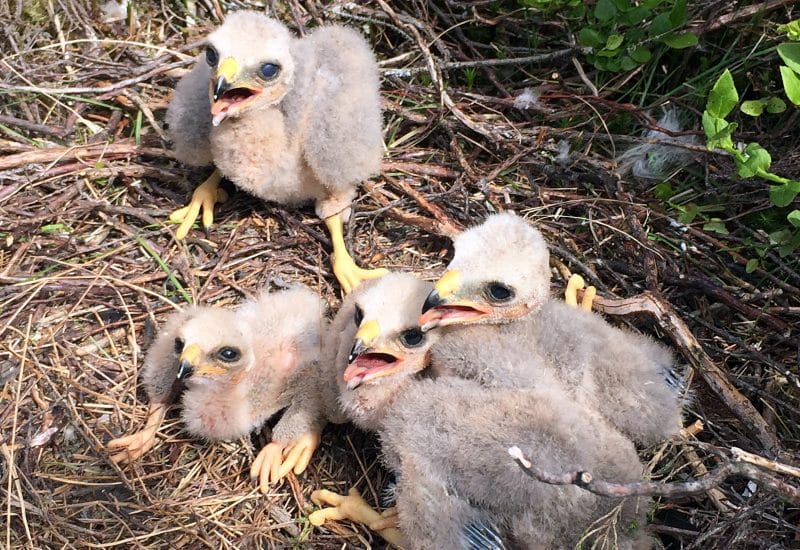 Multiple nests have been successful in 2021 for the seventh year.

Northumberland continues to be a great county for rare Hen Harriers as 2021 is the seventh year in a row multiple nests have been successful. Initially eight nests were detected, and birds laid and fed young, however natural predation resulted in birds successfully fledging from only five of the nests.

Birds that were tagged in Northumberland in previous years have returned including last year’s best breeder Sofia, along with Drew and Colin.  Colin’s tag has ceased to work but careful surveillance work by Natural England staff identified him with his tag still in place but unoperational. Sofia and Drew’s nests were two of those predated this year and a female known to have been born in Langholm, Scotland also nested.

Gill Thompson, National Park Ecologist and chair of the Northumberland Hen Harrier Protection Partnership, said: “It’s great news that from our core population area, birds are now spreading to surrounding land.  Thanks to everyone who played their part this year, including members of the partnership, the individual raptor workers and the private estate staff. The species is going from strength to strength in the county and I hope we will have even more successful nests next year.  I was particularly pleased to hear that Colin, now a full grey adult male, is still doing well and is back in Northumberland after nesting successfully elsewhere last year.”

Tom Dearnley, Forestry England Ecologist, said: “These figures mark the seventh year of breeding success for what is still an exceptionally rare bird.  That’s down to an effective partnership and excellent, sensitively managed habitats. There is much more work to be done.  But it is pleasing to reflect that Northumberland is now a key stronghold in England for what we hope is a national resurgence of the species.”

Steph Bird-Halton, Natural England’s area manager for Northumbria, added: “It’s really exciting to know that 18 young Hen Harriers have fledged in Northumberland during this breeding season. We look forward to continuing this very important work through the partnership and with the raptor workers and estate staff, to see how we can build on this success in future years.”