These spectacular hills teem with wildlife including curlew, red grouse and red squirrels. 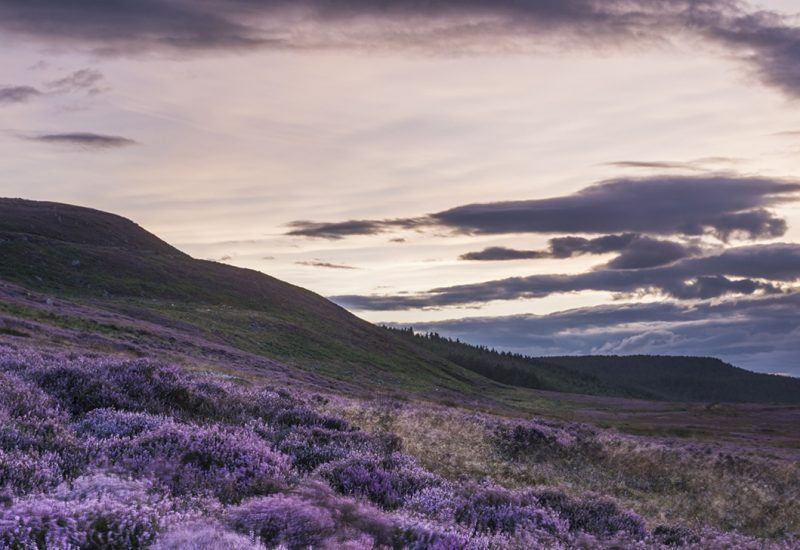 This distinctive ridge, with its craggy profile, stands guard above Rothbury.

A walk along the Simonside Hills must not be missed. From the top, you have a 360 degree view encompassing the Cheviot Hills and North Sea coastline.

As a Special Area of Conservation, it teems with wildlife such as the curlew, red grouse, mountain bumblebee, and even red squirrels in the forest below.

Ancient cairns mark the summit of the ridge of Simonside. Below, in the forest, there is a Bronze Age cemetery and swords from this era, unmarked by fighting, have been found on the lower slopes of Simonside. 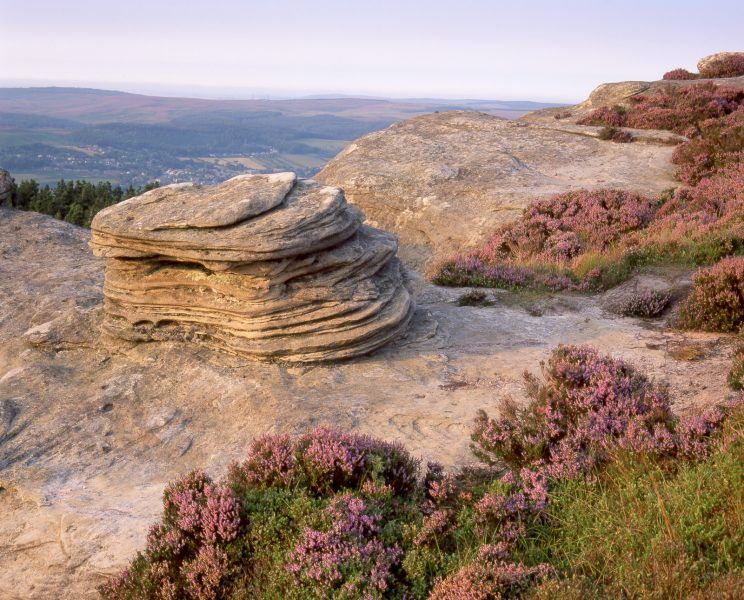 Below the ridge lies Lordenshaws hillfort built 2,000 years ago. The beacon of Simonside was used to warn of a Scots invasion during Tudor times.

Today, Simonside appears as an open expanse of wilderness, with a great deal of modern forestry planting in evidence. It is however a managed landscape in the truest sense and regular burning of the heather in the interests of promoting a healthy game bird population lies at the heart of its maintenance as a ‘wild’ open space.

In 1553, however, the hill slopes were recorded as common pasture. Traces of cultivation have been noted around the lower slopes near Tosson, and elements of the medieval field system around Lordenshaws, including boundaries and ridge and furrow ploughing which post-dates the Deer Park have been recorded by Peter Topping. 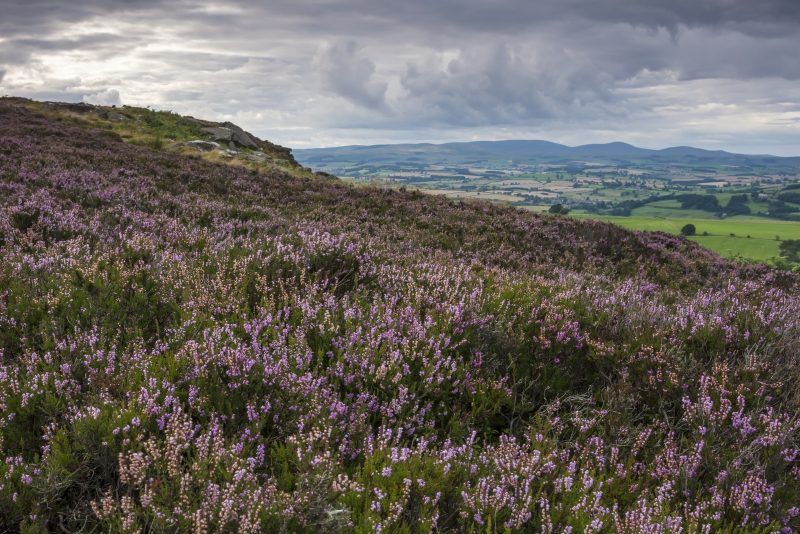 These fields may well have been abandoned before 1800. Narrow rig and furrow overlies the broad rig, early ploughing, and this activity may relate to enclosures made within the area known as ‘Rothbury Forest’ in the 18th century.

The upper slopes of Simonside seem to have remained unenclosed at this time. Mckenzie, writing in 1825, recorded that Simonside was unenclosed even though most of Rothbury Forest had been taken in. During 1785 uncontrolled fire ravaged 1000 acres of Simonside.

What's in a name?

As early as 1279, we have a documentary reference to ‘Simundessete’; by 1580 this had become ‘Simontside’, and it is thought by many that this is a corruption of ‘Sigemund’s – (ge)set, seat or settlement’.

W.W. Tomlinson, writing in his ‘Comprehensive Guide to Northumberland’ in 1916 mentions ‘Simon’s sete or settlement’ and goes on to say the “Simon of mythology was, it seems a domestic brewer to King Arthur, identical with the German Sigmund, and very fond of killing dragoons.”

Unfortunately, there appears to be no Sir Simon in Arthurian legend and it might be that this is a very late association made by the Victorians. It has also been suggested that the name may come from ‘seaman’s sight’ – the fact that the hills can be seen by mariners at sea!

Stories, Folklore and The Duergar

The Simonside Hills are the subject of many stories of ‘fairy folk’ and ‘little people’ and if you visit the area you will see how the landscape has promoted these tales!

The following reference to mystical Simonside appeared in the Morpeth Gazette in 1889:

“And once upon a time did not the caverns and recesses amid the rocky heights of Simonside nightly witness the unearthly revels of a tribe of ugly elves and dwarfs – so says tradition – amongst whom it was dangerous for the solitary wanderer to venture, and is not the dismal “Caudhole Moss,” behind “Spy Law” – the home of Will o’ the Wisp, who, in former years, led benighted and unwary travellers by his treacherous luring light into the depth of the bottomless heaf.” 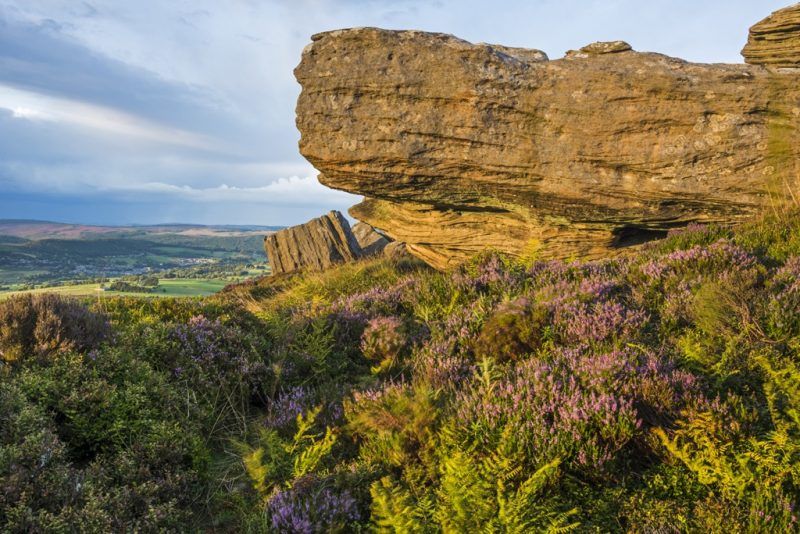 Summer heather on the slopes of Dove Crag at Simonside near Rothbury, Northumberland National Park, England

The most infamous of all Simonside’s ‘little people’ are probably the Duergar. According to the Dictionary of Phrase and Fable (Cobham Brewer 1993), these are “Dwarfs who dwell in rocks and hills; noted for their strength, subtlety, magical powers, and skill in metallurgy. They are the personification of the subterranean powers of nature.”

Folk-tales of the North Country

Grice’s (1944) Folk-tales of the North Countrycontains a Duergar tale about a man travelling to Rothbury who gets the better of a dwarf trying to lure him to his death. A passage from it reads:

“And as soon as the cock had crowed, the dwarf disappeared, and with him the hut and the fire. The traveller looked up. The sky in the east was turning grey, and by its dim light he saw that he was still sitting on the big grey stone.

“But it was the topmost stone of a dark, rugged precipice. Had he leaned over to the left to reach the other gate-post, as the dwarf had challenged him to do, he would have fallen down the cliff and killed himself.”

Heather on the slopes of the Beacon

The beacon of Simonside was used to warn of a Scots invasion during Tudor times. 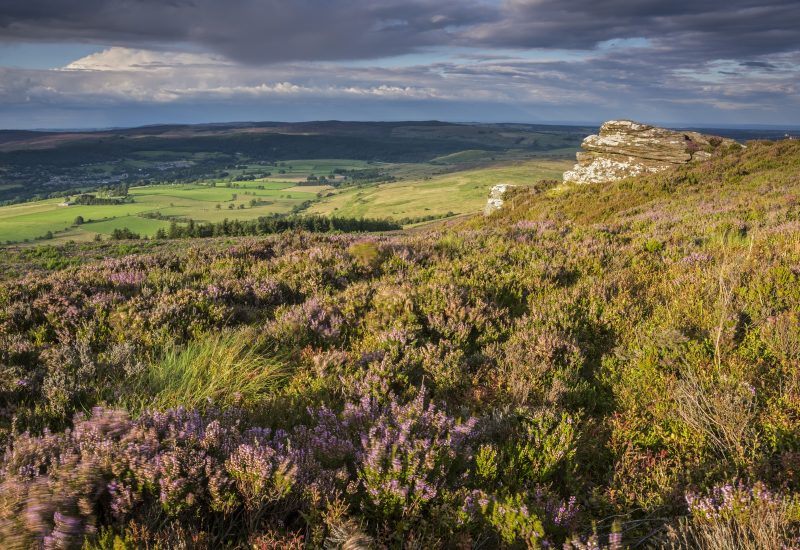 A view of the Simonside Hills

A walk along the Simonside Hills must not be missed. From the top, you have a 360 degree view encompassing the Cheviot Hills and North Sea coastline. 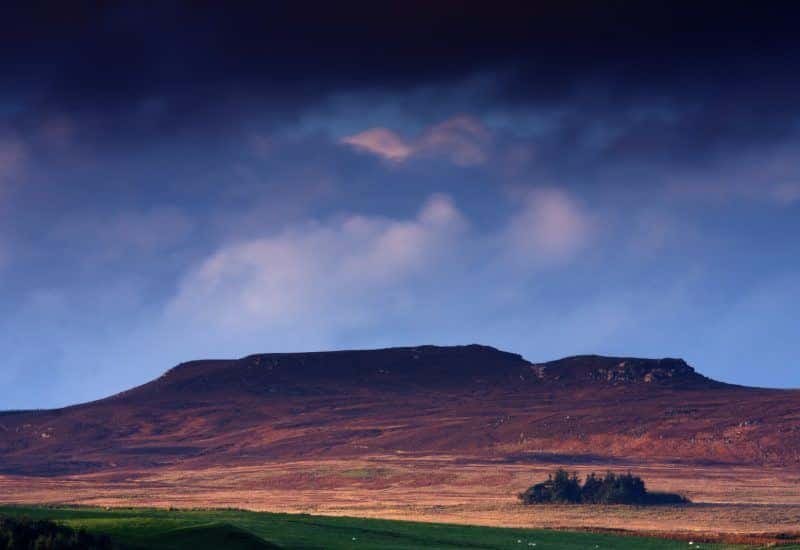