The most photographed spot in the whole of Northumberland National Park. 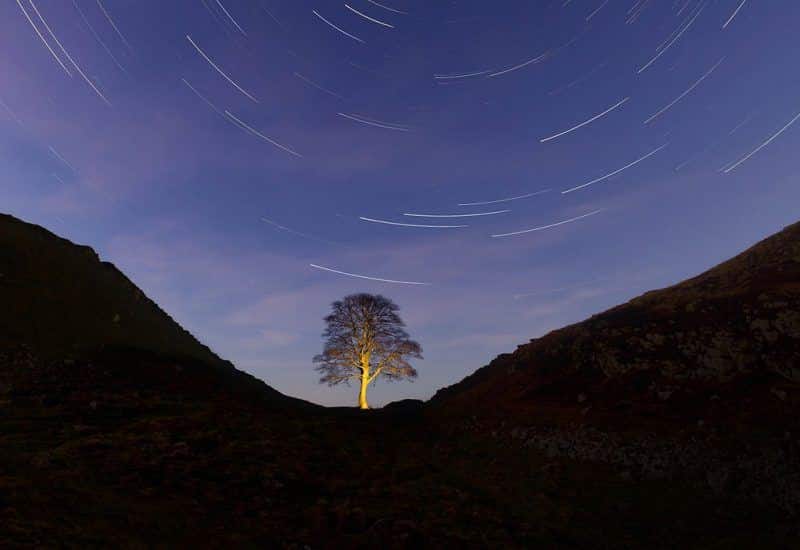 The Sycamore Gap tree is one of the most photographed in the country. It stands in a dramatic dip in Hadrian’s Wall in the Northumberland National Park. In late 2016 it took the crown for English Tree of the Year in the Woodland Trust’s awards.

The Roman Milecastle 39 is just to its left. It’s known as Castle Nick, as it sits in a nick in the hillside.

The site was excavated between 1908 and 1911 and  re-excavated between 1982 and 1987. In the south-east corner was a stone oven and the south-west corner a rectangular building with a sunken floor associated with Roman finds. The milecastle appears to have been occupied until the late 4th century. In the 18th century, a possible milking house was built in the west corner.

The circular wall nearby protects a small replacement sycamore sapling from the local sheep, who would otherwise nibble on it. Sycamore Gap is looked after by both Northumberland National Park and the National Trust. You can see the tree from the nearby Military Road (B6318). To get there from the A1, take the A69, then Park Lane, turning onto Military Road at the Once Brewed junction. Sycamore Gap lies just to the east of Milecastle 39.

A 15-minute walk from either Steel Rigg car park or the Once Brewed car park.