An invigorating half day’s walk to the top of Yeavering Bell – The Hill of the Goats. 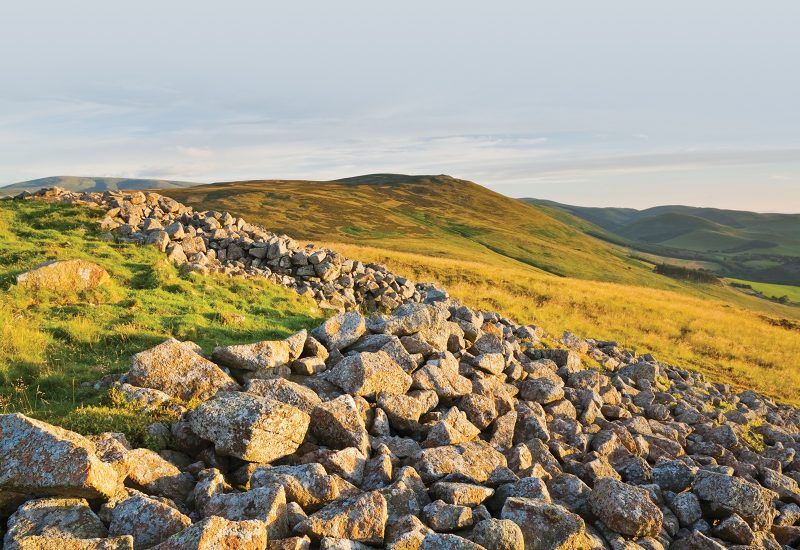 Take an invigorating half day’s walk to the top of Yeavering Bell – The Hill of the Goats. The walk offers stunning views from the top and if you are lucky you may be able to spot some of the wild Cheviot goats along the way. The hilltop is very exposed in poor weather so please go prepared.

Please note the descent from the top of Yeavering Bell is steep.

From the lay-by go through the kissing gate to the right of the monument and turn left, carry on along this path to the main road.

Cross the main road and follow the farm track, signed ‘Torleehouse’, passing the houses of Old Yeavering. Continue on up this track ignoring the permissive path signed ‘Yeavering Bell’.

Over the cattle grid

Once over the cattle grid turn left up to the field gate. Go through the field gate and follow the track to the ladder stile. Cross the stile and turn right and continue up the well-worn path.

At the end of junction turn left

Spend time exploring within the ramparts of Yeavering Bell hillfort. Here are the remains of the largest Iron Age hillfort in the region. Beneath the hillfort, the Anglo-Saxon kings of Northumbria maintained a grand palace.

Much earlier, Neolithic people had a temple here. Yeavering Bell hillfort consists of a tumbled stone rampart, originally up to 2.5metres high, which encloses an area of 5.6 hectares, within which are the still visible platforms of approximately 130 timber-built roundhouses.

Leave the top of the hillfort

Leave the top of the hillfort through the gap in the stone ramparts, bear left and zig-zag down the hill following the well-worn path. Cross the stile and follow the wall down to the next stile.

Once over this stile continue on through the field turning left down the farm track to the ladder stile.

Cross the ladder stile and turn right along the track back to Old Yeavering. Retrace your steps back to your car.

Parking is at the Gefrin lay-by, under the shadow of Yeavering Bell, on the north side of the B6351 between Wooler and Kirknewton, just west of Yeavering.

The layby is on the north side of the road (the eastbound lane).